For residents of the UK and foreign tourists alike there are many parts of the country besides just London that are very interesting and worth your time. Cornwall is one of the most popular UK destinations whether you are a resident of the UK looking for a weekend getaway or are coming from outside of the country and want to spend an extended amount of time there. Cornwall holidays can be a memorable experience for people from all over the world and there is so much variety in Cornwall that it might change the way you look at vacationing in the UK as a whole.

One of the reasons that Cornwall has earned such a great reputation as a holiday destination is that the weather there is extremely mild compared to other areas of the UK. Many people who have visited the UK before have left with the impression that things could be a bit gloomy and rainy. While Cornwall certainly gets rainfall just like everywhere else in the world it is far less than the rest of the country and it is much sunnier as well. The fact that the summers are cooler also makes a Cornwall holiday a great choice if you are looking to get away.

Everyone has different reasons for going on holiday but one thing that people usually agree on is that they want to be near the beach if possible. Cornwall has what is said to be the best beaches in all of Britain making it a great place for some fun in the sun. A holiday in Cornwall isn’t only about the beach though (but it can be if you want it to be!), as the landscape there is quite varied with a ton of different things to see and activities to keep you occupied. In one day you can enjoy fishing and surfing, explore some coves and head to the city to do some shopping. After that you can check out some of the amazing gardens that are on offer there. If you are on a longer holiday in Cornwall you might want to dedicate a whole day to each of those things but for those on a weekend trip it is a luxury to be able to do so much in such a small space.

Despite the relatively small size of Cornwall there is an astounding amount of variety in Cornwall. While vacationing there it might be easy to forget that there are locals that are actually living in Cornwall but there are definitely whole residential areas dedicated to long term residents of the great holiday destination. Some people have even decided to build or buy vacation homes in Cornwall and it has become an increasingly popular place for the rich and famous to visit on vacation. British film stars Jude Law, Kate Winslett and Hugh Grant have all been known to visit Cornwall for holiday either for short or long term visits.

As far as things go for the UK Cornwall is quite remote as it is a peninsula on the southwestern tip of the UK. The area is surrounded on three sides by the English Channel and the Celtic Sea. Even with the remoteness of the area Cornwall still receives five million tourists each year. Cornwall relies on these tourist numbers as tourism makes up 24% of the country’s economy. Those wishing to visit Cornwall for holiday can reach it either through the airport in Newquay or Exeter. Those who are lucky enough to be arriving by private jet, charter or helicopter have the option of being served by the Perranporth airfield. Outside of air travel there are night sleeper and daily rail services that run between Cornwall, London and several other areas of the UK.

One thing that is guaranteed to bring some exposure to Cornwall as a holiday destination is the announcement of the Olympic Torch Relay passing through Cornwall on Saturday, May 19th 2012. The torch will be lit in Greece before arriving in the UK on May 18th and it has been planned so that the flame will come within an hour of 95% of the people in the UK. At 7:00am on May 19th the Olympic Torch Relay will start in Land’s End and then continue on the following path: Sennen, Newlyn, Penzance, Marazion, Rosudgeon, Ashton, Breage, Helston, Falmouth, Truro, Newquay, St Stephen, St Austell, Stenalees, Bugle, Lanivet, Bodmin, Liskeard and finally Saltash. This should make for a very exciting time for anyone that is on holiday in Cornwall during the Olympic Torch Relay.

Cornwall… The county of arts and culture

For those that aren’t as interested in the beach activities, shopping or even seeing the Olympic Torch, Cornwall still has a whole lot to offer people. The scene for arts and culture in Cornwall is alive and well preserved at the same time. The area has been renowned for years now for being artist friendly which could be attributed to the fact that the area is bright due to the light-reflecting sea. This leaves you with many available options to see some great works of art at various exhibits and museums around Cornwall.

If art is not your thing then you can still explore Cornwall and learn a ton about their culture and heritage. There are many hill and cliff top castles that are still standing and there for your viewing pleasure. In fact, many different parts of Cornwall international recognition by UNESCO. These 10 sites with UNESCO recognised status represent their past as tin miners and great efforts have been taken to preserve the heritage and story of Cornwall’s past. Examples of this can be seen at the Geevor Tin Mine which is the largest preserved mining site in the UK or you can see things in a more up close and intimate setting at the Rosevale Mine.

While not inherently important to travellers, another important part of the Cornwall heritage would be the Cornish language. Some consider it to be a dying language which is not entirely untrue although there are many that are trying to preserve the Cornish language to keep it from becoming extinct. This is evident with bilingual signs on public buildings and text and some schools even teach in the Cornish language. You will certainly not have any trouble communicating in English anywhere in Cornwall but it is very interesting to note that there is a whole language of the native people of Cornwall that many people including frequent visitors have yet to explore.

Speaking of interesting things to dig deeper into while on a Cornwall holiday, the average lifestyle of a Cornish person can be very interesting to learn more about as well. Cornish people generally live a much more relaxed lifestyle than people from more urban areas of the UK. While exploring and walking around, stopping and talking to the locals can be a great way to pass the time. While people that work in the tourism industry will certainly be able to give you lots of information about Cornwall while on holiday, it simply can’t compare to striking up a conversation with a lifelong resident of Cornwall.

Cornwall Food and Drink. Home of the world-famous Cornish Pasty!

Eating and drinking is also something that everybody is going to have to take part in at one point or another while on holiday and Cornwall certainly has you more than covered. Being so close to the ocean Cornwall has an abundance of great, fresh seafood ready to be cooked in any way you like. Television chef Rick Stein has a restaurant in Cornwall and Jamie Oliver has just opened his second restaurant, Fifteen in Watergate Bay near Newquay.

Probably the most famous food in Cornwall though would be the Cornish Pasties, a savoury dish made with pastry. Today pasties are usually made with a filling of beef steak, onion or potato with salt and white pepper.  The wet climate and poor soil conditions of Cornwall have historically made it hard for them to grow many arable crops although they are easily able to grow the rich grass that is used in dairying. This has resulted in Cornwall’s other main food export, clotted cream. The clotted cream is used in many local delicacies like Cornish fudge and Cornish ice cream. The clotted cream has Protected Geographical Status under EU law and is not allowed to be made anywhere else in the world.

Many beers are brewed in Cornwall as well by operations like Sharp’s Brewery, Skinner’s Brewery and St. Austell Brewery. They generally produce stouts and ales although there are some smaller operations producing wines, meads and ciders.

Cornwall has definitely proven itself to be a very worthy travel destination over the years. It is no wonder that every year 5 million people choose to go on a Cornwall holiday. There is so much to do in the area with so many varied landscapes that you could spend quite a long time there without getting bored or feeling like you are running out of things to do. If you find yourself in Europe on vacation or are a UK resident looking for a weekend getaway then make sure not to overlook a Cornwall holiday.

Business Owner? Get in Touch 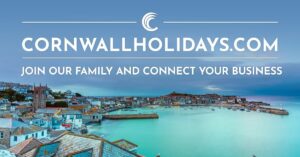 We don’t send spam, we won't share your details and you can unsubscribe any time.